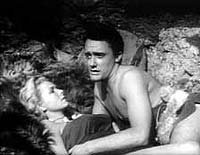 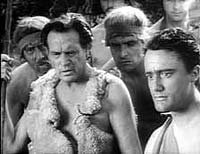 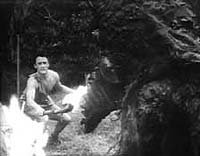 This is a strange caveman movie, as the men are mostly clean-shaven or sport very well-trimmed beards and look nothing like we'd assume cave people would look like. The worst example is young Robert Vaughn, who looks almost exactly like Napoleon Solo from his "Man from UNCLE" show! And, to further confuse the audience, these people also sound an awful lot like everyday folk, while Vaughn sounds like some tortured poet. They must be the most well-spoken and literate group of troglodytes in existence.

When the film begins, Vaughn is apparently very angst-ridden--sort of a goth caveman. He questions EVERYTHING. In fact, it's silly because that's ALL he does--again and again and again. It's obviously a clumsy job of exposition for the audience's sake. Well, this questioning has him eventually asking why the tribe does not go into the "forbidden land". He's told that's because it's forbidden and no one else in the tribe other than Vaughn seems to recognize the circular logic. So, after he recruits a few others, they head into the forbidden land. Even though most of them return and the forbidden land isn't bad, Frank DeKova demands that Vaughn be killed because "it is the law". In fact, DeKova spends all the movie demanding that this person or that person be killed! In one scene, a stranger comes on horseback. He says "peace", at which point DeKova kills him! What a nut case!

This sort of stuff goes on for a while until the end. At that point, a surprise ending is unleashed that ALMOST works--at least until you think about it. Then, it makes absolutely no sense and is very sloppy, indeed. You find out that these cave people are actually from the future, as they find a book with 20th century things in it--including a picture of the United Nations building. But then, oddly, the narrator tells that this is from the past and that this sort of thing has happened again and again due to nuclear bombs. Yeah, but are they meaning to say that there was ANOTHER United Nations building many millenia ago?! Huh?! What?!

Overall, dumb from start to finish. If the ending hadn't been a jumbled mess, perhaps the film might have worked a bit better, but nothing could overcome the costumes, modern hair and language as well as craptastic special effects. For example, a scene from an earlier crappy film, KING DINOSAUR, is spliced into TEENAGE CAVE MAN. It's the cruel scene where an alligator with fins glues to its back fights for real with a giant iguana or monitor lizard. It's obviously NOT two dinosaurs and it's unimaginable that the film people would really let these poor creatures tear each other to pieces for our entertainment! This sort of schlocky borrowing also occurs when they take clips directly from SAGA OF THE VIKING WOMEN. Sloppy and stupid and a cynical attempt to pad the film without spending extra money!

By the way, if you see DeKova and wondered where you've seen him before, he'd done many movies and TV shows--including an unfunny recurring role as a stupid American Indian on "F Troop" as well as a mobster on "The Untouchables".

Review by planktonrules from the Internet Movie Database.