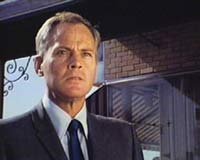 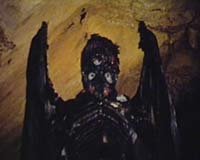 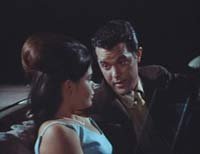 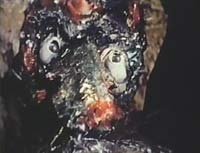 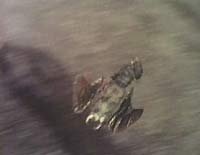 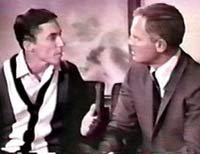 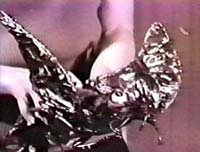 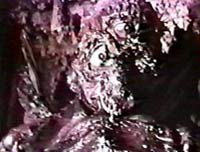 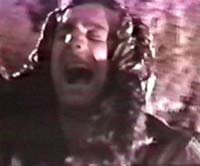 Badfilm addicts all have that one special piece of drek which is their personal favorite awful movie. For some, it will always be the Godzilla, Gamera, and Starman movies. Others will have that soft spot for The Thing With Two Heads, In The Year 2889, or Creation Of The Humanoids. And naturally, badfilm devotees are devout members of the cult of Ed Wood, for whom viewings of Plan Nine From Outer Space are a religious sacrement. But for myself, my one special badfilm has to be Zontar: The Thing From Venus.

Perhaps it's because this film was one of the movies I grew up with. Zontar was a staple of the local Sunday Morning Movie program on TV which I watched religiously as a kid. Words cannot quite describe the "quality" of this movie. It can only be experienced. Zontar was evidently made in somebody's home, a local high-school, and a shopping mall in a small town situated near a cave by low-budget schlockmeister Larry Buchanan. It's not that Zontar is an exceptionally bad movie made by exceptionally awful no-talent hacks. Simply, the various elements of this movie just happen to combine in just the right way to make Zontar a classic of Grade-Z cinema.

The "plot" goes something like this: Zontar, a giant three-eyed, bat-winged mutant lobster from Venus, hitches a ride on a satellite to takeover Earth with the aid of ex-high school science nerd Keith Ritchie (Anthony Houston). Only the brave but relentlessly wooden Dr.Curt Taylor (John Agar) stands in its way. Zontar takes over various humans with its injectopods; small creatures who fly with the aid of some guy holding them on the end of a stick. Mrs. science-nerd (Susan Bjurman) whines about the victims losing their personalities, only it swiftly becomes evident that only after being taken over by Zontar do any of the people in this movie even have personalities in the first place.

Zontar begins the takeover by imposing massive Republican-style energy deregulation like they now have in California, which soon shuts down everything --electricity, gas, cars... Everything. This causes the townspeople to run about like brainless sheep through the shopping mall car park. From here, the plot thins. Curt and Keith debate philosophy over the phone. While Keith stays by his plutonium crystal radio-set, Curt barely manages to avoid becoming a Zontar zombie himself, which means he gets to remain the same lovable drone he's always been. Curt then proceeds to solve the problem of Zontar as any true red-blooded American would --by shooting everybody. He goes to Keith's house to have one more debate with his old friend before shooting him. During this, Mrs. science-nerd, having gone to the caves, is killed by Zontar, after which Keith switches sides. Curt shoots some more people, and Keith takes his handy homebuilt plutonium laser and kills both Zontar and himself. Victory for the Earth, however, means the survivors (and audience) must endure a boring monologue by Curt Taylor about the nature of mankind.

Most badfilms were made by directors devoted to their particular conception of "art" (e.g. John Travolta's and Roger Christian's Battlefield Dearth). Some are conscious ripoffs of higher-budget and better quality movies (e.g. Roger Corman's Star Wars knock-off, Battle Beyond The Stars). Zontar manages to surpass the "standards" of this genre by being not only a bad movie in its own right, but also by being itself a direct line-by-line steal of Roger Corman's low-budget schlock classic It Conquered The World (1962). For this alone, Larry Buchanan has to be hailed as a schlockmesiter of the first rank by taking cinematic incest to new dimensions and in the process managing to mutate ICTW, merely a typical piece of drek, into a true Grade-Z psychozen experience.

Review by lordzontar90 from the Internet Movie Database.