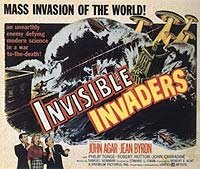 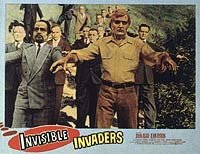 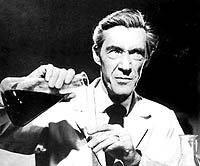 So how did we 1950's teenagers survive the decade. After all, the monsters were coming at us from all directions, but mainly from LA's Bronson Canyon. Good thing the yucko's were on drive-in screens, otherwise we teens would all be dead meat. Here the baddies are invisible creatures of some sort and move with all the speed of garden slugs over dry ground. They're attacking earth and turning their human victims into evil-eye zombies. Trouble is they're going to destroy us all unless our heroes can figure out a way to make them visible. So it's one of those instances of what you can't see that hurts you; plus, invisible monsters do save anemic budget costs (IMDB).

The movie's best parts are the stock footage of real-life disasters that also cover for the bland narrative: wow, crashing buildings, exploding dams, fiery skyscrapers. Then there's the great John Carradine who's the movie's scariest part. Too bad we don't see more of him. But, please, someone tell the writers that the moon, where the invisibles live, is not a planet. I guess someone flunked Night Sky 101. Plus, someone please wake up actress Byron who manages one bland expression for the 70-minutes, which all things considered seems understandable. Speaking of zombies, catch the mob of undead all in businessman suits and eye-liner. Boy, is that a change, not a woman or working man in sight. I figure they must be the producers anxious to again save production costs.

All in all, it's a scary movie that doesn't scare, though I would give bonuses to Agar and Tonge who give it a real try.

Review by dougdoepke from the Internet Movie Database.