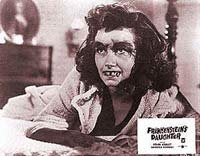 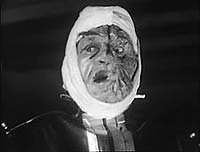 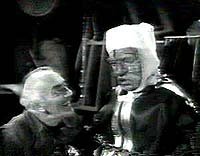 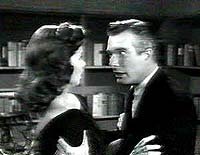 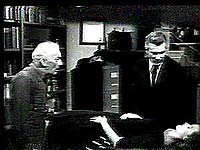 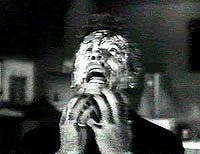 In time for last Halloween (which I subsequently skipped!), I acquired scores of horrorsci-fi fare from the genre's Grade-Z heyday; this, obviously, was one of them -' which I decided to get hold of in spite of Leonard Maltin's unflattering BOMB rating! Anyway, the late 1950s saw favorite Gothicfantasy themes being brought up to date and mixed with such topical fads as juvenile delinquency (I WAS A TEENAGE WEREWOLF [1957]) or, as here and in BLOOD OF Dracula (1957), rock'n'roll music! Curiously enough, in the space of a year we had a number of films on the same theme (and they were also comparably substandard): I WAS A TEENAGE FRANKENSTEIN (1957), FRANKENSTEIN - 1970 (1958) and, the last to be released, FRANKENSTEIN'S DAUGHTER itself!

Incidentally, there are some definite points of interest to the title under review but these do not make it a good picture. First of all, we have not one but two monsters -' and they are both female and incredibly ugly (like the afore-mentioned BLOOD OF Dracula and DAUGHTER OF DR. JEKYLL [1957], one of them -' played by Sandra Knight, the future Mrs. Jack Nicholson! -' is drugged into turning hideous and, frankly, it is simply a case of the makers having their cake and eating it...since these scenes basically serve to pad out the running-time and little more)! The official, titular creature is one of the most memorable of the era for all the wrong reasons: one, the fact that the make-up was devised to be applied on to a man (so what transpires has nothing at all to do with who the character, a luscious girl, had been beforehand!) but also because she is attired in a spaced-out costume (complete with robotic motions) as Michael Jackson would frequently adopt during his performing tours some 30 years later!!

The last and, possibly, most entertaining thing is the trio of dabblers in the unknown (one is the heroine's elderly uncle who is not above stealing vital ingredients from the government in his search to stall the aging process, the others a direct descendant of the Frankenstein name and his condescending aide and the latter's forebears' own assistant now passing off as the old man's gardener) who spend so much time at each others' throat one wonders how they ever got anything cooking at all in the lab! Interestingly, Frankenstein has a secret workspace within where he is assembling yet another creature from dead body parts: missing only the head, he mows down the heroine's sluttish friend (who, in the very first scene, comes face to face with the one Knight herself had inadvertently become!) with his car...but no sooner has the monster been revived that it runs out of control and out of the house!

Knight suspects the truth about her 'sleep-walking' activities (since she wakes up each morning with a hazy recollection of events but sporting the clothes described in the papers as having been worn by the monster) yet she never fingers the sleazeball Frank as the culprit...while her thick-headed boyfriend merely (and continually) scoffs at her nightmarish accounts! The rock'n'roll element comes into play here during a barbecue given at Knight's house (even if her uncle had just suffered a near-fatal heart attack!) and incorporates a couple of tunes sung by, of all people, Harold Lloyd Jr.(!) who, naturally, also handles the intentional comedy-relief angle throughout the film (but, as I said, the lab antics provide the real giggles here!).

Also on hand are a couple of cops who have their hands full trying to cope with the many misdeeds (not to mention, egos and anxieties). The film is noted for not skimping on the gore front: we get to see a couple of severed hands, the mangled legs of the monster's last donor, and even the villain's face being ravaged by acid when the hazardous liquid thrown at the creature by the hero (whom he had somehow been keeping at bay with the lame, repeated shoving of a stretcher!) misses its mark completely...after which the monster expires, too, when clumsily setting itself on fire when coming in contact with an active Bunsen burner!

P.S. Now...where to get hold of an English-friendly copy of SANTO VS.

Review by MARIO GAUCI from the Internet Movie Database.