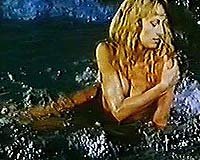 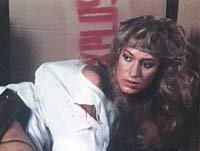 This bizarre, yet endearing movie can only be described as a hodge-podge of CONAN THE BARBARIAN, MAD MAX, ALICE IN WONDERLAND, and MONTHY PYTHON, mixed in with WONDER WOMAN or any other Amazonian-themed flick. The opening scene introduces us to some bucolic travelers who enter a barter faire called Heaven's Gate. The barterers at this faire wear leather jerkins and tunics and variations of mail, outfits one would expect in a medieval village scene; however, the wares are decidedly un-medieval: boxes of Corn Flakes, card games, American flags (?), and Johnson & Johnson soap and shampoo. Evidently, our bucolic village trading post is the outposts of a post-apocalyptic society, where people have to create or barter all their goods for themselves. I found the clearly modern American items in a medieval context humorous and clever.

Suddenly, some metal guitar riffs drop in and a group of bad dudes pulled directly from Mad Max: Road Warrior enter to destroy our peaceful society. The leader is dressed like a German kaiser; some sport Nazi kitschchic; others football pads, motorcycle helmets and chains. I guess in the apocalypse, villains wear whatever they can lay hands on and call it high fashion. This motley crew might as well be playing to Mötley Crüe or Mötörhead-that's how metal the situation is (in fact, Mötörhead does compose some of the tracks in the film). The Nazi leader shoots a gun, which fires an arrow on a string that is reeled back to him, pulling the hapless female victim (the sister of the two male protagonists) along with it. All these sorts of non-sequitur elements make this film charming in a strange, niche, trying-to-be-'80s-metal sort of way. At one point in the film, a woman tugs on the arm of a (living) mummified man; the arm comes abruptly off. He responds, "I told you to watch the arm."

The two male protagonists (who evidently keep using the word "cute" to describe each other or situations in which they find themselves, enhancing the homoerotic overtones, which are bolstered by a toga-wearing femme man and another rainbow man in a tutu) are brothers, and the woman who got dragged away by the arrow-on-a-string was their sister. Now, they have to go on a journey to rescue their sister. First, they discover that the Road Warrior villains who kidnapped their sister are the evil Norks. But the only person who knows where the Norks reside is She.

She is the eponymous Amazonian queen who rules this Pan-am land, also known as She Who Must Be Obeyed (by the way, my grandmother had a coffee mug with this phrase on it). She is played by sandy-haired Sandahl Bergman and has a coterie of worshippers who deadeningly chant, "She! She! She," ad infinitum--I must say I found the scenes of prostrate worshippers disturbing. She seems to not much care about her worshippers and leaves them to worship her in her absence. She has much better things to do. Like slash guys in chain mail who jump out of boxes and stab her. She plays a skilled warrior, but she does manage to get cut by all 8 or so of these mailed box-dwelling men. Luckily, she has access to a healing pool which quickly remedies her wounds after soaking in the water; while healing, the crone guarding the pool tells her that She's undoing will be due to romantic attraction to a man.

From there, our trusty brothers find She, kidnap her, and somehow end up in an abandoned factory with the aforementioned mummy men, but then Shanda and She's handmaidens come to rescue She. Various '80s tracks pump in at different moments, exhibiting the awesomeness of the scenes. She's soldiers imprison the brothers, but then release them at She's behest. Being directed to Nork valley, the two men stumble upon a pool party with rainbow umbrellas and guys and dolls arrayed in Roman togas. The brothers are invited to have dinner with the commune, and the resultant dinner scene, with formal tux worn by the men and the characters swaying to '50s doo-wop on the record player, almost feels like a John Hughes moment. Of course, the party's post-ambulatory slumber is broken when the hosts of the party turn into vampires, apparently their signature act of hospitality towards travelers. Luckily, She and her handmaiden come to the rescue. She and Shanda accompany the brothers for the rest of their quest. It does not spoil the plot too much to point out, that, after the final battle, the film ends with a melancholy love song.

Male-female dynamics, metal, and a strange mixture of anarcho-hippie-post-apocalypticism and a zany juxtaposition of modernity and antiquity, are the main themes, and the film just gets better and better from there. Required watching. Clearly, this is a top movie from the decade, and it deserves a 1010 for zaniness.

Review by joshuajohnson-17997 from the Internet Movie Database.