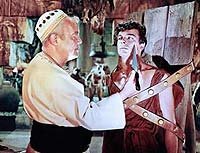 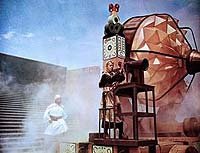 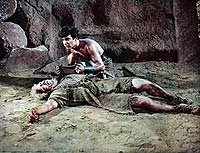 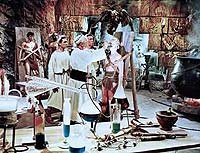 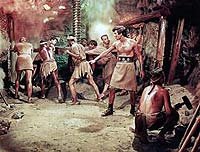 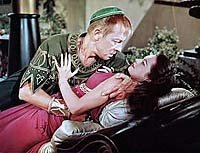 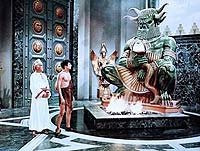 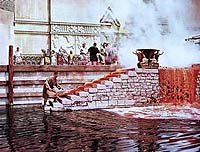 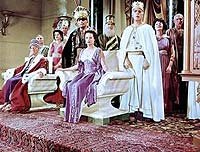 Leonard Maltin's Movies on TV lists this as George Pal's worst film. This is overly harsh and will steer you away from a fun film. While "Atlantis" is far from Pal's best, it's definitely better than "Conquest of Space," or "Doc Savage," both of which have embarrassing scripts, bad acting and heavy-handed direction.

Anyone who knows anything about Pal knows MGM rushed "Atlantis" into production before the script was refined, and it shows. Still, the major problem is not so much the script but the casting. The two leads, Sal Ponti as Demetrius and Joyce Taylor as Princess Antillia are terrible, particularly Taylor. She is beyond unlikable when she allows Zaren (John Dall) to make a slave of Demetrius after having been rescued and returned to Atlantis by him. If her performance suggested she suspected Zaren responsible for having Demetrius placed in irons, it would have softened her, making her later reunion with Demetrius believable. Unfortunately, she displays so much venom towards him when he verbalizes his suspicions of her betrayal, believability never recovers. Yet, Ponti is equally at fault. If, through a look or gesture we could see that perhaps he didn't truly believe she would have made a slave of him, the film would have been improved immensely.

Other actors fare better, but John Dall hams it up about as much as anyone could, making his also hammy performance in "Spartacus" appear to be Oscar bait by comparison. And Edward Platt as Azor is a bit too holier than thou, though he is quite restrained. That he became the Chief on TV's Get Smart later, doesn't help sell his believability in a serious role, but his performance can't be held accountable for interesting career decisions.

The actor who runs away with the picture is Jay Novello, as Xandros a Greek who Demetrius saves in the slave camp. After having thrown mud at the princess, who he assumes is responsible for making him a slave, Demetrius is sent to an evil scientist to be transformed into an animal to be used as a beast of burden (shades of H. G. Wells of course). Demetrius escapes this fate, but Xandros does not. Though we see the signs of an ox reveal themselves on his ears and nose, Xandros struggles to maintain his humanity as the animal instinct grows. Novello, who gave a campy but fun performance in Irwin Allen's "The Lost World" (1960), actually evokes some reasonable compassion in "Atlantis" as we watch him struggle to hold on to his humanity. His ox makeup is effectively creepy without being overdone, and his facial features lend themselves to that look. I don't know why more people haven't recognized this actor.

Where the film shines is in its atmospheric sense of place. Prior to Pal's "Atlantis" the only other version of the Atlantis myth to be seen on screen were the various versions of Atlantide, with Queen Antinea and the remnants of the empire of Atlantis discovered beneath the Sahara desert. A very dry prospect. Pal's "Atlantis" is a place that has to be reached by sea and ultimately, by submarine, one in the shape of a fish. Even King Neptune is shown in a dream sequence. The film feels aquatic and very Greek somehow, particularly the look of the city, the costumes and war machines. This definitely gives the film a mythological quality the Atlantide films don't possess.

And of course, Pal's attention to color and production design, in spite of the fact that much was stolen from earlier productions, pluses the less than adequate budget. In general, what the film is, is a very good American version of Italian peplum (sword and sandal epics shot at Cinecitta). It's a much better film than Steve Reeves' "Hercules" or any number of peplum from the late 50s and early 60s, and it's not dubbed either ( aside from the use of Paul Frees, who dubbed Demetrius' father's voice, and a few others).

Yes, Pal swipes footage from "Quo Vadis" for the destruction of Atlantis, and for some wide arena shots. The mattes of the Colosseum are up to Pal's usual standards. It's just that he didn't shoot the original footage. But the visual effects that Pal's team did create are for the most part, well done. In fact, "Atlantis" probably boasts one scene that stands with the finest work Pal ever did, the submarine fish's approach to Demetrius' boat and its arrival at Atlantis. First we hear the whirring sound and we see the metallic vessel surface in the distance behind Demetrius, unaware of its approach towards his boat. Though the sub's arrival at Atlantis uses earlier footage too, the combined result of seeing Atlantis from the circular window as the sub rises then cutting to the vessel pulling into harbor with people in togas cheering is one of the most memorable scenes in just about any fantasy film from that era. Though some of the miniatures used for the sinking of Atlantis look like what they are, the designs themselves and the lighting make the shots highly atmospheric.

Along with Miklos Rozsa's score to Pal's "The Power," Russell Garcia's scores to "The Time Machine" and "Atlantis the Lost Continent" are the best of Pal's long career. Garcia did the two films back to back and are both perfectly suited to their subjects. With "Atlantis" Garcia created a mini-epic. Regal and majestic, swirling with magical and diabolical moments, the music elevates the film beyond the peplum it really is.

Review by kirksworks from the Internet Movie Database.