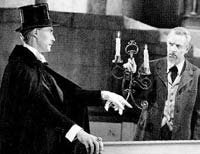 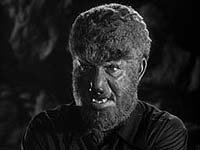 "House of Dracula" (Universal, 1945), directed by Erle C. Kenton, an immediate sequel to HOUSE OF FRANKENSTEIN (1944), rejoins the Universal monsters of The Wolf Man, Count Dracula and The Frankenstein Monster in another attempt for a cure of the eternal curse. But in spite of the title that would indicate a Dracula thriller, the house in question happens to be the residence of a scientist named Edelmann.

In the previous horror fest, Count Dracula (John Carradine) meets his doom after facing the rising sun; Lawrence Talbot (Lon Chaney Jr.) is shot and killed by a silver bullet; and the Monster (Glenn Strange), who carries the wounded mad scientist, Doctor Niemann (Boris Karloff), each come to their ends when pursued by torch-wielding villagers, forced into the forest and walking into and sinking slowly beneath a pool of quicksand. A fine climax, however, with this sequel, the story begins with a vampire bat changing into the form of Count Dracula coming to the residence of Doctor Franz Edelmann (Onslow Stevens) seeking a cure for his vampiric condition. That same night, a second visitor, Lawrence Talbot, appears (this time sporting a mustache), hoping also for a cure. With Dracula and Talbot alive and well, the screenwriters of this production have obviously exhausted themselves in obtaining an original story, thus, repeating themselves with some slight alterations as well as the lack of an explanation as to how these two victims of eternal doom have survived their demise. It is interesting that someone didn't think about adding Klaris, the living mummy, into this roaster, but since Lon Chaney Jr. was doing that, it would be impossible for him to perform as two monster characters into the same film. As with HOUSE OF FRANKENSTEIN, the Monster, whose preserved body has been found along with the skeleton remains of Doctor Niemann, is the least important of the three monsters, and once again, he is given very limited screen time. Like Niemann, Doctor Edelmann has a hunchback assistant, this time in the form of a woman, a nurse named Nina (Jane Adams). Edelman comes upon the logical reason for Dracula's undeath being more medical than supernatural, as well as theorizing Talbot's affliction being more physiology rather than the curse of a gypsy. While Edelmann is experimenting with the Monster, Dracula finds himself a new victim in Miliza Morelle (Martha O'Driscoll). After destroying Dracula by opening his casket during the sunrise, Edelmann, who had earlier received contaminated blood transformation from Dracula, gradually becomes insane in the manner of Jekyll and Hyde, committing a series of murders by night, and being his simple self by day.

Unlike the horror thrillers made by Universal in the 1930s, HOUSE OF Dracula plays more like a kiddie matinée, this being the least of the combined monster cycle that began with FRANKENSTEIN MEETS THE WOLF MAN (1943). Not that HOUSE OF Dracula is a bad movie, in fact, it's not very good either. It lacks originality, especially with its final minutes that appears to be rushed, along with the climax of the Monster's umpteenth demise lifted from the fadeout of THE GHOST OF FRANKENSTEIN (1942). In spite of these clichés, HOUSE OF Dracula does contain some memorable moments, including the scene where Lawrence Talbot is placed in a Visaria jail where he awaits the rising of the full moon, and transforms into the wolf man and runs rapidly around his locked jail cell before he retreats in exhaustion, as witnessed by Edelmann and Inspector Holtz (Lionel Atwill). Another key scene later finds Talbot, out of desperation trying to avoid another horror in changing into a wolf man during the upcoming full moon, hurries to the edge of a cliff and leaps into the sea where the waves push him into a cave below lies the Frankenstein monster. John Carradine in his second go-round as Count Dracula, sporting top hat and mustache as in the previous film, makes do with his eerie performance. Onslow Stevens, who is not quite a household name in horror films as Boris Karloff or Bela Lugosi, does fine work with his latter transformation in the story from good to evil doctor. Lionel Atwill, who had appeared in every "Frankenstein" sequel since 1939, all in different screen characters, makes his final performance in the series.

Seen in the supporting cast are Ludwig Stossel as Zigfried, one of the murder victims; Skelton Knaggs as Steinmuhl, Zigfried's brother; and Joseph E. Bernard as Brahams. Knaggs plays an interesting interpretation as one of the crazed villagers, a role that could have been excellently played by Dwight Frye (Renfield in Dracula; Fritz in FRANKENSTEIN) had he not died in 1943. Besides the actors and special effects, HOUSE OF Dracula includes many dark scenes to give this particularly segment a "film noir" feel.

While "House of Dracula" was reportedly supposed to have ended the Universal monster horror cycle, Drac, Wolfie and Franky returned for one more encore in ABBOTT AND COSTELLO MEET FRANKENSTEIN (1948).

HOUSE OF Dracula, which runs at 67 minutes, is available for viewing on video cassette. It not only enjoyed frequent television revivals on commercial channels after the midnight hours during the 1960s and '70s, but had played on cable television's Sci-Fi Channe, American Movie Classics (2000-2002) and Turner Classic Movies (TCM premiere, October 3, 2012).

Review by lugonian from the Internet Movie Database.