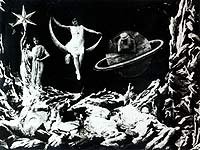 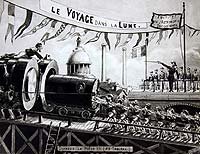 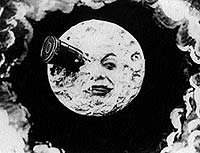 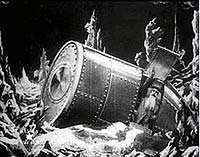 "A Trip to the Moon" is justly the most popular early film. I've seen thousands of early short movies and have commented on some of the most interesting cases, but this one is more amusing and imaginative than the rest (although a rather sinister reflection of colonialism may be read into the explorers treatment of the Moon's natives). It's better than Georges Méliès's other surviving pictures because it has a more developed story--without the tableau vivant style becoming as boring as it usually does. Wacky humor and trick shots help, but that's in the rest of his oeuvre, too. Influenced by the works of Jules Verne and H.G. Wells, as well as Adolphe Dennery's adaptation of those pieces, the story is about a gang of astronomers, who, launched from a cannon onto the Moon, encounter explosive aliens (or "Selenites", as Méliès called them).

Méliès used the stop-motion (or substitution-splice) effect and arising smoke for explosive characters in many of his films--same with superimpositions, animated miniatures and placing a fish tank in front of the camera. Additionally, his set designs were the best of the day. I easily forget it's all done within a cramped studio. He often used moving props, too, but this is one of the few that I've seen where the prop is pulled towards the camera--creating the famous rocket kissing the moon's eye gag. The following shot is a temporal replay of that action from a different perspective. It works here, but Edwin S. Porter would make the mistake of adopting the technique for "Life of an American Fireman", which was reedited later, leading many to believe it was a landmark in narrative editing. The "30 tableaux", as Méliès called it, is linked by dissolves--a common transition at the time, which he introduced.

Méliès made it known that his goal was to push cinema towards resembling theatre. The benefit was longer films with more developed stories. Given this, it's ironic that he was one of the first filmmakers to achieve effects specific to motion pictures (i.e. incapable of being produced in theatre or other art forms)... i.e. the trick shots.

Numerous early shorts are blatant imitations of Méliès's work, but they usually weren't as funny or creative. Many studios even duped his films and sold them as their own, which led to Méliès patenting his work in the U.S. and joining the Motion Pictures Patents Company (MPPC). "A Trip to the Moon" represents the height of his career. His work would soon diminish under the hectic schedule of the Nickelodeon age and the monopolization by the MPPC and Pathé, and he would end up burning his own negatives. Watch Jacques Meny's documentary "La Magie Méliès" (1997) for a good telling of his life and films.

(Note: This is one of four films that I've commented on because they're landmarks of early narrative development in film history. The others are "As Seen Through a Telescope", "The Great Train Robbery" and "Rescued by Rover".).

Review by Cineanalyst from the Internet Movie Database.