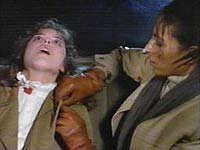 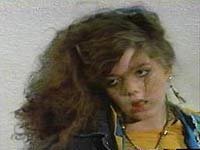 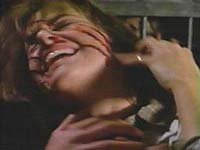 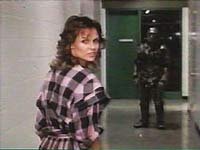 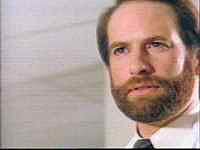 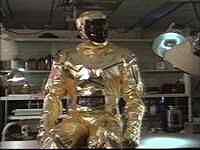 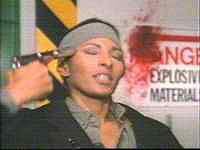 The Vindicator opens with the memorable scene of a monkey in a cage attacking a ripping apart a small toy robot as part of a scientific experiment. This random act violence sold it for me and I'm happy to say the rest of Vindicator provided a veritable feast of cheese.

The Vindicator is about a scientist (David McIlwraith) who is nearly killed an explosion in his lab whose tattered remains are put inside an experimental body suitarmour. For some unfathomable reason he is fitted with a Rage Response Activator, a device wired into his brain that will turn him homicidal if he comes into physical contact with any other person. They give some daft explanation about how it is a necessary defensive mechanism but I cannot see the logic in installing such a device unless you wanted a rampaging cyborg killing machine. It is especially ridiculous when it is indicated the suit Carl is wearing is actually an experimental space suit. What possible need would there be for an astronaut to turn into the incredible hulk whilst on a mission? He predictably breaks out of the lab and proceeds to battle the dodgy scientists who put him in the suit, along with the ninja assassin Hunter played by Pam Grier (No, really).

The Vindicator itself looks pretty damn goofy. It is basically a dude in a mangled golden foil suit. He also has a perpetually bewildered look in his eyes, that doesn't inspire fear or even compassion. I guess you can't blame him for that, most people watching the movie will have that same look on their faces.

The acting is of the really bad, stilted, 'I'm not sure what the character's emotions or thoughts are that this point so I'll take a punt and spurt out my dialogue in a random tone of voice whilst trying not look at the camera' school of acting. The actor playing the funky black scientist even struggles with this last part.

It is after this initial accidental death that the Vindicator goes after the scientists. Strangely enough the whole Rage Response Activator 'touch me and I'll kill you' thing doesn't play as big a role as you might expect with Carl going after his former colleges in a reasonably detached manner. There was one scene where he rather brutally kills some street punks who push him around. I know that it is de rigueur for street gangs to randomly assault the lead characters in eighties movies but surely one of them must have realised it might be a bad idea to attack the hulking cyborg guy even if he does look like C3PO's retarded cousin. As it is they don't even seem that surprised to see a mangled golden cyborg walking down the street as though it was an every day occurrence for them. The only other time this rage response activator comes up in the movie is when old Carl can't give his wife a hug. When Hunter tries to turn this against him by throwing her into him so he'll be forced to kill her he casually remarks he has reprogrammed himself (Off-screen naturally) so this doesn't happen. They could have left out the whole Rage Response Activator thing and just gone with a straight revenge story and it wouldn't have made a huge difference to the movie.

There is an amusing sequence in the sewers as Grier and her cronies track down the Vindicator. Due to his armoured hide they are all armed with weapons which fire 'vapourised acid.' For some bizarre reason when these weapons fire it is represented on screen by cartoonish red lines that streak toward their targets ala Ghostbusters. The Vindicator fights back by ripping a gas pipe out of the wall and incinerating all of Grier's goons in an enormous streak of flame that comes out. The resulting fireball is so huge and powerful that it comes out of the sewers out of a man hole and blows up the van a couple of the scientists are. Strangely enough Grier escapes by throwing herself down into the inch deep water despite the fact she was closest to the Vindicator. This is one of several fake fiery explosions throughout the movie, including the death of funky black scientist when the vindicator sends his van of a cliff. (This is after they capture The Vindicator by trapping him in a giant lump of gello- no, seriously).

There is also one unsettling and long and out of place sequence in which Carl's treacherous overweight friend, who looks like a poor man's Ned Beatty, reveals his infatuation with Carl's wife and tries to rape her. It goes on for about 5-10 minutes and is full of disturbing shots of the guy slobbering over the wife's face, gyrating on top of her and trying to pull her dress off. It is icky to say the least and seems really out of whack with most of the rest of the movie which is kind of cartoonish and larger than life in its violence.

The movies finale involves the Vindicator battling a whole bunch of other dudes in battle suits. For whatever reason all these other dudes are less kick-arse than Carl, some of them being dispatched by the wife simply by having a protruding tube in their side ripped out. Luckily for Carl the suit he is wearing lacks this crucial design flaw. The only really memorable part toward the end is the death of Grier. Doing something I've never seen a baddie do in a movie before, in the middle of her confrontation with the Vindicator she decides she really doesn't stand a chance against him and in a rather of matter of fact manner blows her own brains out with his pistol.

Review by Skutter-2 from the Internet Movie Database.