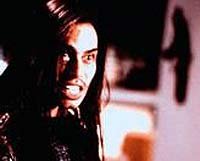 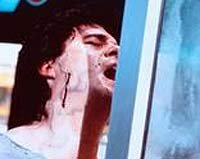 I have always love the film Scanners and have always loved David Cronenberg, but after Deadringers, I always felt he started to go downhill from a wonderful ride in the horror genre. Scanners was one of his best in his early period, when he was working from original screenplays and wasn't in an adaptation funk at all (ie., Naked Lunch, M. Butterfly and Crash). It was a promising plotline and was very entertaining. It has also become a cult classic. So when I saw this sequel when it first came out, I didn't think it would be as good as it is.

I'll spare you the plotline since you've undoubtably have read the other reviews, but I will comment on the films structure. It works surprisingly well considering the original didn't leave much for a sequel like this one. If one were to truly look at the first film for a sequel, the likely route would have been to have the main characters be on the run from the secret corporate organizations (a plotline used in Firestarter) which could lead to a very boring and predictable outcome. But this film was made ten years later and the plotline ideas can have new twists and it is this factor that makes this film a success.

The opening ropes you in by the way it mimics the opening to the original--homeless, drifting Scanner losses mind in public and gets corralled by the guys in shades and trenchcoats. But its different from the original opening in that Scanners 2 opens with the vagabond Scanner screaming at the city in agony as the mental voices of the population invade his extrasensory mind and drive him crazy. It would be like an itch you can't scratch. I liked this aspect of the opening and it made me realize the filmmaker was a huge fan of the first film. It proved he wanted to be true to the first film and not just make another sequel in name only. The plot device of making the Scanners junkies to mind suppressing drugs was another excellent addition. It further proves the filmmaker's desire to make a good sequel.

If you loved the first film, you have to give this one a try. It is very entertaining, great character development and delivers in the gore factor department.

Review by jbpott from the Internet Movie Database.