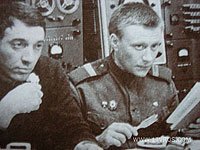 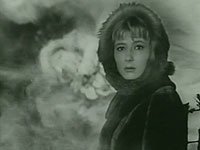 An energy dome (the titular 'wall') periodically materialises on the snowy taiga that causes people to apparently enter their own past, perhaps as part of an alien attempt at communication. The premise is similar to the superior 'Solaris' (1972). Both films find isolated researchers studying an inexplicable phenomenon that may be sentient and attempting to communicate with the Earthlings through visions extracted from their memories. Neither film offers much in the way exposition. As most of 'The Mysterious Wall' takes place in, or around, a cabin and the Wall itself is depicted as storm-clouds, the film is not nearly as interesting as 'Solaris', which takes place in a space-station orbiting the titular planet, looking down on what might be a sentient ocean. 'The Mysterious Wall' is quite talky and not a lot happens as the researchers discuss the phenomenon, comment occasionally on bureaucracy, and eventually venture close enough to the wall to seemingly be transported into an event from their past, where the people they interact with may be aliens. Despite being available on-line with English subtitles, the film appears to be obscure and surprisingly little has been written about it (at least in English). Likely only of interest to dedicated fans of the genre or of Soviet cinema.

Review by jamesrupert2014 from the Internet Movie Database.