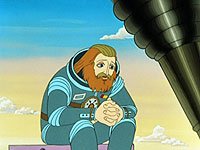 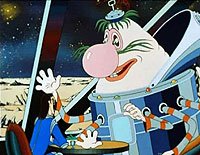 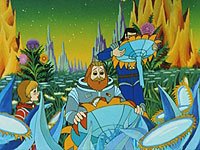 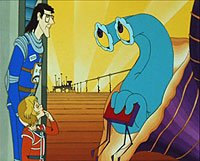 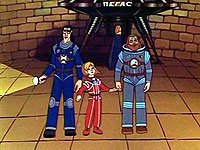 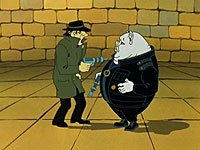 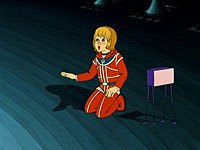 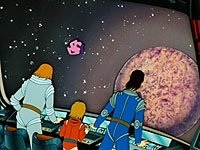 Have said many times about being a fan of Soyuzmultfilm, and consider most of their output of what has been personally seen (which is a vast majority of it, while needing to see more of their later work) classic level. This applies to all decades and genres, am especially fond of their 1950s work and their fantasies and adaptations of classic literature. As well as their animation techniques such as rotoscoping and cut out and those that use pre-existing classical music.

'The Mystery of the Third Planet' is one of not many forays into science fiction for Soyuzmultfilm, but it is a highly intriguing, beautifully done and quite excellent film. Even if it is not quite as historically significant as their, and Soviet animation's, first science-fiction animation 1953's 'Flight to the Moon' (also great, but to me this is the better film) directed by Zinaida and Valentina Brumberg. But so what? The quality matters much more, and this delivers on that in big spades. It is one of their best (relatively) later animations, in the top half quality-wise of their output and one of the better sci-fi animated films to exist in my view.

Occasionally, the visuals are ever so slightly over-elaborate in the more action-oriented moments and the momentum is not always there.

Also wish it was longer too, under an hour is not long enough.

Conversely, the animation is great. The backgrounds are gorgeously surreal as are the alien images (sometimes in a wonderfully nightmarish way), the character designs are imaginative at their best (that for Gromozeka especially, the arms are especially cleverly done) and the colours are full of atmosphere. It is hard to forget the soundtrack too, sometimes quite funky but also beautifully orchestrated and atmosphere-enhancing. Really liked the characters, a colourful bunch, with a likeable lead in Alisa, a not too scary but menacing enough villain and a comical character in Gromozeka that didn't grate.

From start to finish, the story is always immensely engaging, full of charm and far from cold emotionally. Some nice inventive moments too, it is cohesive, it never felt predictable and as far as animated films seen recently this is up there with among the most unique narratively and there is a clever twist regarding the villain. To me, the relaxed and not hurried pace was appreciated as was the at times surprisingly optimistic tone, the mystery element is suspenseful and intriguing and while the action is not fast and furious it still excites.

Review by TheLittleSongbird from the Internet Movie Database.