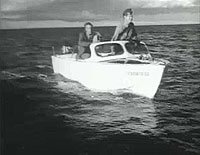 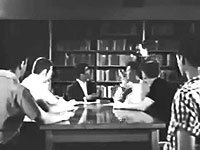 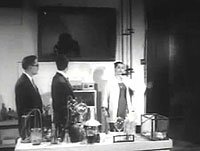 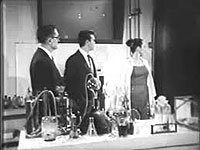 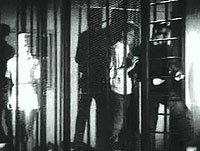 The story: Four teenagers head out for a day's water skiing. And decide to picnic on a mysterious island. They go exploring and meet a strange woman and a procession of ambling zombie types - they run away and find their boat has vanished. They are all eventually captured by the mysterious woman and her Zombie sidekick Ivan (who looks weirdly like Alfred Molina who has managed to put on an overcoat with removing the coat hanger first) and locked in two cages with bars wide enough to slide a well greased elephant through, let alone a skinny teenager. Back on the mainland two of the missing 'kids' friends go to the Sheriff's office - which appears to consist of a hatch in a wall like a cheap all-night taxi place. "Gee willickers! Mr sheriff, our friends have vanished!" - they don't actually say "Gee willickers!" - but you know they want to.

The Sheriff goes out in a very small boat and looks about a bit and comes back (if internal continuity is to be believed, the next morning) having found nothing. The kids borrow a boat and head off to look too. they arrive on the island. have a conversation with the Mysterious woman and leave. As they cast off two mysterious strangers arrive on another boat. They turn out to be nasty spy types. Unless the mysterious lady doctor completes her formula soon the plans will change and the Russians will nuke America. "The fools!" The mysterious woman doctor flares her nostrils and takes them to her lab where she zombiefies a gorilla she just happens to have hanging about.

Cut to an American Flag outside a building. Cut to a bad actor in a military uniform sat behind a desk. Another bad actor in a military uniform comes in and tells the seated actor about the diabolical gas plot threatening the USA. He has one lead. A photo of the lady doctor. He is going to search the USA state by state starting with California, working up the West coast and then moving east state by state. (I wish I was making this up)

"I would also request, marine and navy helicopters and every reconnaissance plane the Air force has available!" he says, cuing in the audiences mind the tedious prospect of hours of stock footage of planes being used by the end of the flick. "That's a big order, I hope we can fill it." says the seated general. He couldn't, thank god, because not an inch of stock footage made it to the screen.

Back on Spy Island the boys pick the padlock on their cage by reaching through the gaps large enough to get their whole bodies through. they rush to the girl's cage and the boy who picked the lock keeps watch while the boy who didn't futilely rattles the lock on the girl's cage door. At which point the audience decides these kids deserve everything they get. They are too stupid to be allowed to breed. The boys heroically sneak away when it's dark. (It isn't dark. It's supposed to be but the film-makers were too cheap to hire a night for day filter).

The boys start to build a raft then sneak back to their cell.

The "Gee Willakers" boy and girl go the sheriff's house and tell them of their suspicions about the mysterious lady. The continuity has got so out of whack now that it appears they have taken the whole night to get back to the mainland. OK, says the sheriff, I'll take a look - and off they all go again.

The girls are dragged to the Zombification chamber. They boys heroically do nothing till it's too late. The Sheriff arrives and turns out to have been a baddie all along. One of the spies shoots him and while Ivan is disposing of the body the boys make their move. After the the weirdest rolling around on the floor fighting ever filmed without the contestants being naked and covered in mud, the boys get the gun, get the girls out of the Zombifying room, and shove the lady doctor in when she won't de-zombify the girls. They find the antidote and make her drink it. She smashes the flask but there is enough to rescue the girls. Our heroes run around escaping for a bit. The gorilla licks some of the antidote off the floor and goes on the rampage and fights Ivan. The kids escape to the Sheriff's boat and sail away home.

All of which sounds like any other kids thrilling adventure movie except it is so inanely done. Everything shot in long takes with everyone standing in lines. At one point while watching the gorilla being zombiefied the spies watch it happening behind them over their shoulders and when Ivan comes to take it out of the room there is is this amazing nothing ten second shot of three people standing in a line looking over their shoulders at a blank wall. Ten seconds doesn't sound like a long time but believe me; on screen it's an age to be watching bad actors doing nothing - badly.

This one is for serious bad movie fans only. A mix confusion and boredom in exactly equal amounts. Avoid. There are lots of far better (by which I mean enjoyable) bad movies out there.

Review by junk-monkey from the Internet Movie Database.