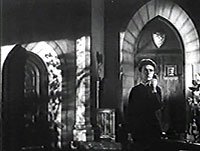 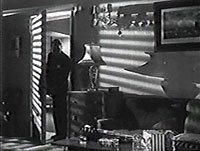 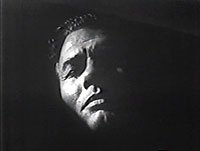 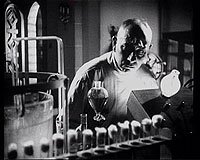 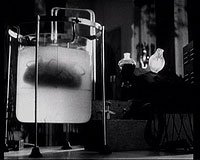 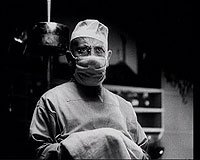 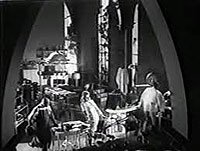 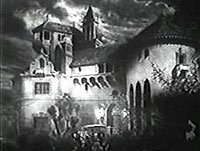 A short way into this film I realized that it is the same film that remade as "Donovan's Brain" (with Lew Ayers)--a very good movie. "The Lady and the Monster" is the original version of this story but based on the title you'd never know it--after all, there really is no monster in the film and it's not exactly a horror film...not exactly.

Erich Von Stroheim of all people plays the lead in this film. He's a not exactly mad scientist who has weird theories about keeping a brain alive after death--on the other hand, he sure ain't normal! He is a guardian for a rather hysterical young lady who is a bad actress (Vera Ralston--who was apparently sleeping with the head of the studio). And, he has an assistant (Richard Arlen) who can't make up his mind about the ethics of Von Stroheim's work.

One day, an actual human subject falls into Von Stroheim's lap, so to speak. There was an accident and he was called in to treat the victims--one of which was a rich and powerful man, Mr. Donovan. He and Arlen 'borrow' the brain when Donovan dies--unethical, sure, but probably not a bad thing...or is it?! The experiment turns out to be a great success--the brain is kept alive for many days. However, something weird happens--the brain begins to show amazing powers--powers to control Arlen and Von Stroheim!

As I said above, this isn't exactly a horror film. While it has some elements, the story is a but more understated and the scientists aren't quite mad enough to qualify it as a horror film. I think of it more as 'horror lite'. I enjoyed the film, for the most part, but also think the film needed a bit more polish and a few changes. The biggest problem was Ralston's character. Throughout much of the early part of the film she seemed really high-strung and went on and on about how horrible Von Stroheim was---even though he hadn't really done anything yet! It just made little sense--nor did her usual bizarre delivery of her lines. Apart from that the film was good but did seem to meander a bit here and there. As a result, and I RARELY say this, I really think the remake was a better film--and with a much more appropriate title.

Review by MartinHafer from the Internet Movie Database.