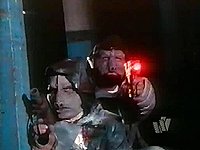 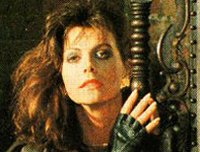 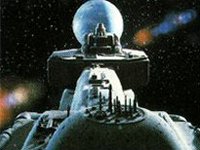 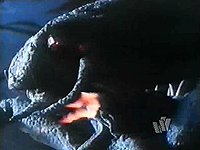 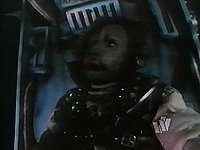 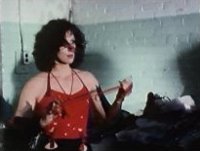 This film combines the elements from various science fiction movies such as Star Wars, Mad Max, Planet of the Apes and many others with an obviously very small budget to create a very strange and pretty bad film. A lot of the reason it is bad is that the plot makes no sense, the main hero is annoying and the aliens at times disappear and are almost forgotten. Still, as bad as it is, it is also a rather fun watch as it does kind of just go from one place to the other quickly!

The story has a guy stealing government secrets who launches a space shuttle into space to escape. While in orbit he witnesses the arrival of several ships that promptly blast Earth and take over the planet in every quick fashion. The guy is stuck in space for five years, but is then able to return where he is attacked by mutant people and rescued by a girl. Seems the guy in orbit is famous as the thing he stole my hold information on a weapon capable of defeating the strange pig aliens, who despite what looked to be hundreds of ships seems to only have a very light force left on Earth. They go on a quest to get to the place the weapon may be and find hippy survivors and a Mad Max type guy who looks a lot like Sylvester Stallone but isn't!

The film does not really give any good reason why the aliens attacked earth nor do they give any good reason why they would stay around. There is also a scene where the hero and girl are attacked by a strange stop motion monster and you wonder where it came from. There is no reason for the aliens at the beginning to ignore the hero's ship when they were blasting earth as it showed them blowing up several planes and such, so why not his ship? Also, destroying the weapon that defeated the aliens seems stupid as they could just send another fleet in to enslave earth once again!

So what we get is a very unlikable hero who humps pillows and who in the future becomes a Jewish old man (through the movie an old man recounts the adventure to 'save' earth). We also get a female with an Australian accent who looks really good in the Mad Max garb rather than the ill fitting sheep vest. We get a Sylvester Stallone look-a-like who rules his kingdom, but yields almost immediately in a fight and we sometimes get pig aliens with very bad prosthetic on their face that they apparently took no time to blend in. So what do we have? A bad, but fun movie! Seriously though, considering the state of the world during the old man scenes it looks like they have accomplished absolutely nothing after defeating the aliens...

Review by Aaron1375 from the Internet Movie Database.